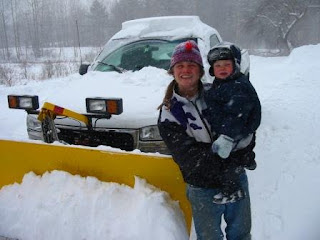 Christa and Asa are in front of the new (used) farm truck on Valentines Day. Our Toyota Pickup truck is on the way out so we decided to look for a used truck with a larger bed and more power to haul a livestock trailer. We lucked out and saw an ad in the paper for a truck with a plow up in Underhill. We took a look at it, drove it around a bit and decided the farm should purchase it. The timing could not have been better!

The Nor'easter arrived on Valentines Day and by the next day we had 31 inches of new snow! Fortunately the air temperature was cold (single digits) enough to produce light snow. Nevertheless, we were busy over the next two days as the snow fell and we plowed our driveways, shoveled paths to the pigs and chickens, and shoveled snow away from the greenhouse and hoophouses. Fortunately we did not have any structures collapse, though quite a few dairy barns across the state did collapse and some animals were lost.

One of our Tamworth sows chose to farrow the evening of the storm. She farrowed 8 piglets, but only 4 were alive when I fed her the next morning. She eventually lost the remaining 4, probably due to crushing. She is a large sow and the space in the hoophouse we had her in was likely not big enough. That coupled with the cold weather may have been a contributor to the deaths.
The other pigs were having fun in the snow and taking a last lap around their field before the snow really piled up. The next day I had to shovel a path from their water and feeding area up to their hoophouse. They happily took off in single file down their snow trail! 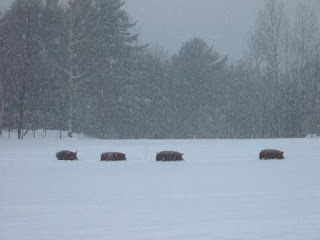 Posted by jericho farmer at 5:48 PM