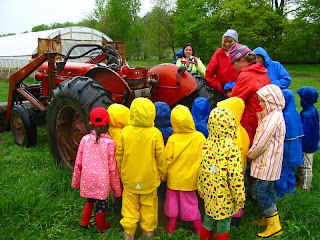 Christa is teaching a group of local school kids and teachers about the "3 point hitch" on our farm tractor. She spent a good hour and a half walking the kids through the farm, looking at animals and vegetables and talking about where your food choices come from. Its never to early for farm education! 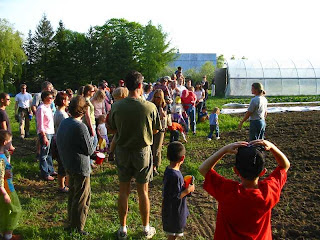 Christa gave another farm tour this week at our CSA Potluck. It was held on a lovely evening and there was a great turnout! We doubled our Summer CSA share this year and it SOLD OUT incredibly fast. All who attended got a tour of the livestock and vegetable fields and finished with a wonderful potluck meal. We served up our chicken and pork and not a speck was left at the end.

It is great to visit with the folks who support your farm. I hope they enjoyed the potluck as much as we did. We look forward to seeing more of our shareholders over the summer and for another farm potluck in the fall!

New crop of lamb and beef 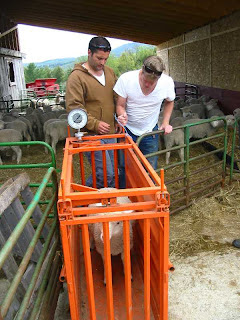 About two weeks ago we picked up 66 beautiful spring lambs from a young couple in the northern part of Vermont. We visited their farm in the winter to look over the newly born lambs and to see their operation. We were impressed and decided to buy lambs from them this spring.


Here you can see Chris and his friend Tarik weighing a lamb. There is a gate at each end of the scale, one to let the lamb in, the other to let them out. We pay the farmer by the pound for the lambs.

Once we got them all weighed we tricked them into our livestock trailer with a bucket of grain. They were pretty packed in our trailer. We hoped to make just one trip, but thought better of it for the lambs comfort, unloaded some lambs and made two trips. 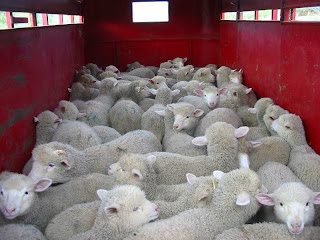 They took to their new home and started munching on grass right away. They look great and by fall will by nice and fat for harvesting. 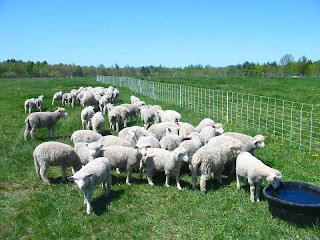 Our shipment of Devon-Angus beef yearlings arrived today. Here they are getting off the livestock trailer. There is plenty of grass out in the pastures and I am glad they are here to graze it. We could have used them about a week ago to keep ahead of the growth! 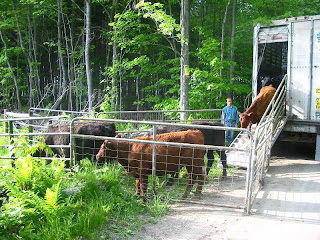 Posted by jericho farmer at 10:56 PM No comments: Links to this post 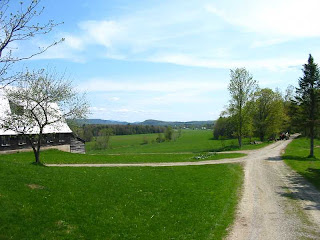 This is a photo looking south from Ed's farmstead. Ed has been here on this farm since the 1950s. Its been a dairy farm and now he raises some beef and a few horses as well as hays quite a few acres on his place and around town.

Ed holds quite a few appointed positions for the town. I don't know how long he has held them, but I bet its been a while. They include: Animal Control Officer, Fence Viewer, Inspector of Lumber/Shingles, and Weigher of Coal. The last two positions are probably obsolete as these are not in use much like they were years ago. Some Vermont towns remove these appointed positions since they are not in use. I suspect ours will when Ed feels like he can no longer serve. Ed says he is 72, but he looks and works like he is in his 50s.
His farm has a wonderful assortment of old farm machinery on it and whenever I think I might need a part or an implement I give Ed a call. That was the case a few weeks ago when I was looking for an old hay wagon to build a moveable chicken coop. So I called Ed and asked if he knew someone who might have an old one for sale. He said "Yup... me". So I hurried on over and he took me back through a maze of machinery and showed me an old wagon frame. Just the ticket. We settled on a price and just the other day I finally got over there to pick it up. The tongue was rusted up a bit so Ed and I heated and lubed it up to unfreeze it. He hitched it to the tractor and ran it around the farm turning it back and forth and finally it loosened up enough for me to drive it 6 miles down the road to the farm. 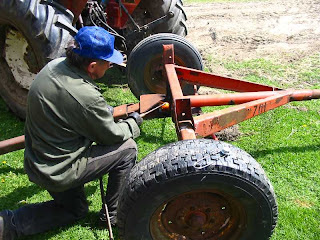 Tyler and I will be working on getting a coop built on this frame over the next few days. Then we can move their housing around the pasture instead of being locked down to one location.
We younger farmers are fortunate to have the old timers around. I like to visit with them and hear their stories. You can sure learn a lot from them just by listening. And when I visit Ed my ears are wide open.
Posted by jericho farmer at 10:24 PM 1 comment: Links to this post 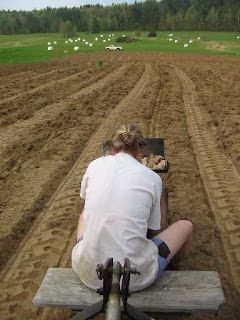 Christa is sitting on the transplanter seat dropping cut seed potatoes into a furrow that is dug in the soil by a metal shoe. There are two metal wheels behind the metal shoe that close the furrow. The photo is from the back of the tractor, Christa is traveling backwards at a slow pace. the field that we prepared is about 550 feet long and it takes us 20 minutes to plant this distance with the transplanter. I planted a few rows by hand and it took me 50 minutes per row.

We are planting on some nice sandy loam soil at a farm about 2 miles south of us. We plowed and harrowed a 2 acre piece for this year. A short term rental has been signed on this plot and we are looking forward to growing crops on this soil. The folks who own the land had been vegetable farmers about 20 years ago, so they are very knowledgeable and I pick their brains often.

You can see the farm truck in the distance and the white marshmallows are wrapped round bales. The sames ones that I fed the pigs this past winter (I take the wrapping off of course). 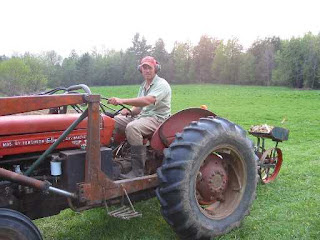 Posted by jericho farmer at 11:18 PM No comments: Links to this post 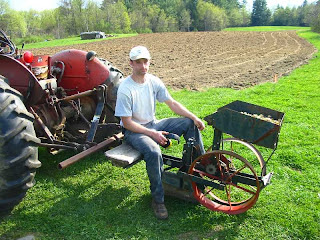 Say hello to a new farmhand this season! He is a bright, young, strong 2nd cousin to Christa (my lovely wife). He has a degree in forestry and is finishing up a masters at UVM in teaching.

We have Tyler sharing in some of the fun tasks on the farm: collecting eggs, transplanting vegetables, working on irrigation setup, and planting potatoes. He will get the full farm experience this summer - you can be sure of that.
Posted by jericho farmer at 10:53 PM No comments: Links to this post 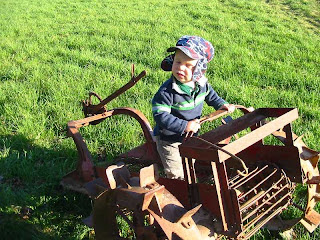 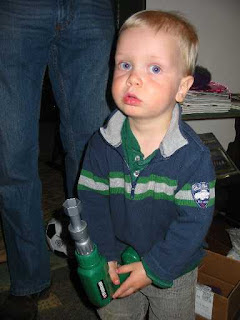 He got a drill and a ride on the potato digger!

What more could a boy ask for?
Posted by jericho farmer at 11:14 PM No comments: Links to this post 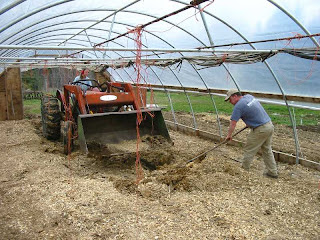 Everybody's working for the weekend!

The pigs are working on their new pasture...

Christa and Brian are cleaning out the chicken litter from the hoophouse...

It makes the homebrew disappear though - thanks Brian!
Posted by jericho farmer at 9:56 PM No comments: Links to this post