Picked up an Allis Chalmers "G" cultivating tractor today in Brookfield, Vermont.  I bought it in the fall from an old dairy farmer who runs a sizeable dairy operation (look at his JD corn harvester).  He saw it on a trip in the southern states and had to have it.  That was about 4 years ago and he found that he doesn't use it much anymore. 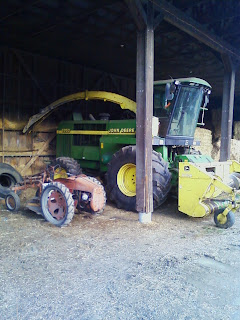 So after dropping off 15 lambs this morning for slaughter, I headed with the livestock trailer to pick up the "G".  I was taking a chance on whether it would fit in the livestock trailer, but I remember it having the wheels on the narrowest setting.  It was a squeeze, but it fit in just fine and was easier to fasten down than on a flat bed trailer. 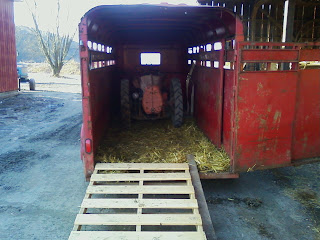 This "G" might be going to a vegetable farmer in Burlington who has been on the lookout for one.  Its gone already!
Posted by jericho farmer at 10:31 PM