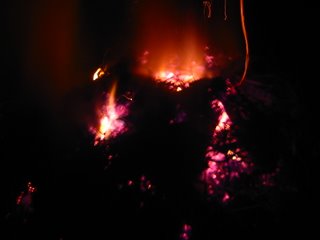 Our potatoes and tomatoes got hit by a late blight. Blight is caused by a fungus that eats away at the fruit and vines. It came in on some wet, cool, windy weather in late August and within a few days the plants started to wither and die. We sent a sample to the University of Vermont Plant Sciences Dept and they confirmed that it was Late Blight. So we have to destroy the blight affected fruit and all the vines through fire or deep burial. Fire is more exciting so we went that route. But we are bummed as we planned on having hoophouse tomatoes through October and we had to destroy alot of green fruit that were on their way to ripe tomatoes! That is farming though, you roll with the punches and move on. I am glad that we are a diversified farm and can rely on other sources of income from the farm that are not affected by plant disease: The beef, pigs, lamb and chickens are all doing well and will be "harvested" this fall.
Posted by jericho farmer at 7:03 PM